Dangerous speech in an ‘infodemic’

The spread of the coronavirus, drastic government measures to contain it, and growing financial worries have marked a rare world event in which almost everyone feels afraid. In contrast to many crises where some people are relatively more safe and calm, this virus is far-reaching and almost everyone is susceptible to it. As a consequence, an unusual number and variety of people are feeling alarmed and capable of sowing fear.

Unfortunately, this makes more people susceptible to dangerous speech—a kind of expression which increases the risk its audience will condone or commit violence against others— no matter how unlikely or unfounded it is. As we wrote in March after seeing a surge of Anti-Asian attacks, disease outbreaks historically arouse fear and anger, making people more likely to scapegoat, demonize, and harm those blamed for illness. As a result, target groups are even more at risk, rushing to protect themselves not only from the disease, but also from would-be attackers. Now, we’re seeing another worrisome pattern—that of authority figures capitalizing on the public’s need for guidance and security to spread disinformation, including dangerous speech.

In the past few months, prominent figures have circulated dubious remedies for COVID-19. In Myanmar, prominent Buddhist monks have suggested that palm seeds, ground peppercorns, and limes can prevent transmission; one Burmese Minister even shared a Facebook post claiming that onions could stop the virus. 1 Two weeks ago, U.S. President Donald Trump mused at a briefing about the medical benefits of injecting household disinfectants—an obviously dangerous practice.2 In Iran, fake remedies have had dire consequences—more than a thousand people have been injured after ingesting industrial alcohol, laden with toxic methanol, believed to protect against the virus.3 People want simple, guaranteed solutions against the illness and these assurances, while unproven, ineffective or even actively harmful, provide exactly that.

This kind of enticing misinformation, harmful on its own, is often accompanied by dangerous speech. Strikingly, speakers often make the same utterly false claims in completely different groups and countries. In Myanmar, a preacher, defying a ban on mass gatherings, posted a sermon claiming that Christians are immune 4; in Cambodia, Prime Minister Hun Sen expressed that all Cambodians were virtually immune to the disease.5 In Bangladesh, Facebook users shared posts from religious authorities claiming that devout Muslims are immune from the virus.6. In addition, these posts imply, without evidence, that Bangladesh’s lockdown and social-distancing measures are attempts by atheists to shut down mosques. 7. Suggesting that Muslims can’t catch the virus and that efforts to slow down the disease are a sinister plot not only risks people ignoring these measures, but also paints anyone supporting preventative measures as a threat to Muslims. Such assertions are all the more dangerous in light of the social and historical context in Bangladesh where, in 2015, secular bloggers were attacked and murdered out of the belief that they were anti-mosque.8 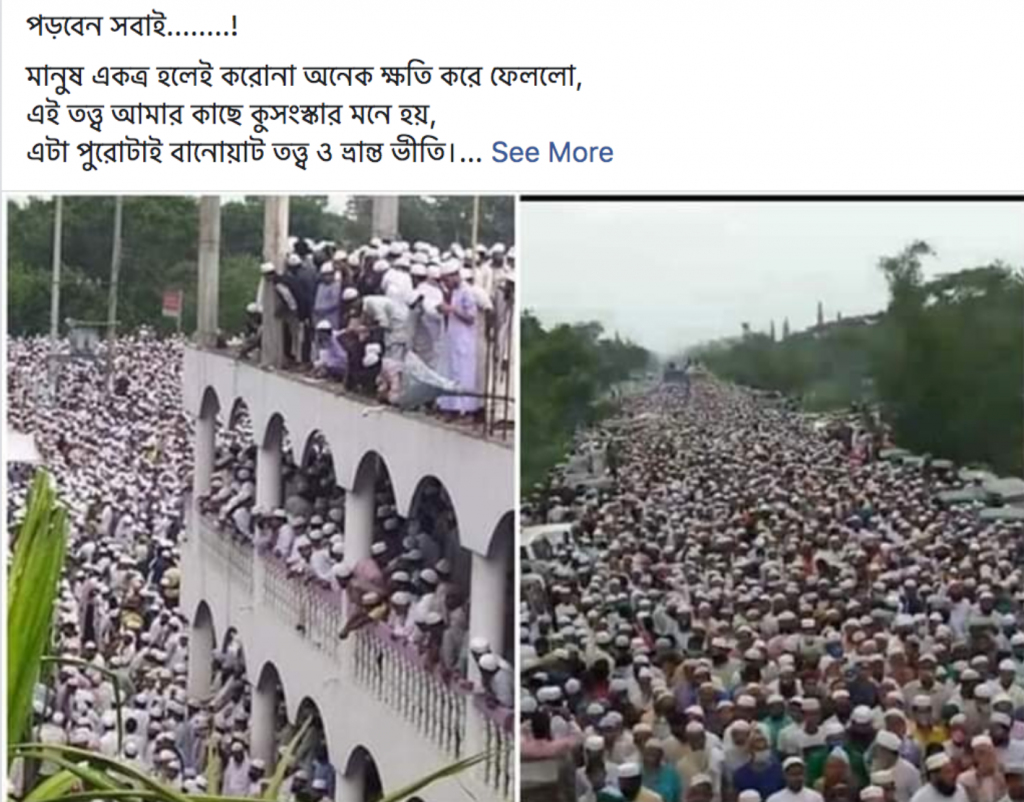 Tens of thousands gather in Sarail, Bangladesh on April 18 for a Muslim preacher’s funeral, in defiance of a nationwide lockdown. According to circulating Facebook posts, some in attendance believe themselves to be immune from the coronavirus. Screenshots from Facebook. 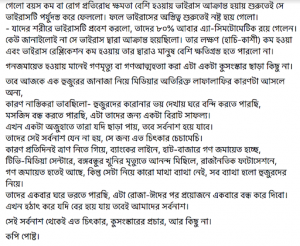 In neighboring India, COVID-19 related dangerous speech is being aimed instead at Muslims, who are said to be spreading the virus intentionally to harm people of other religions. Videos falsely claiming to show Muslims spitting and coughing on people have gone viral and the hashtag “#CoronaJihad” is estimated to have been seen by upwards of 165 million Twitter users.9. Seen as virus-carriers, Muslims have been assaulted with cricket bats and iron rods and Sikh religious authorities broadcast messages from temples advising people against doing business with Muslim farmers. 10

Members of government and influential media figures are perpetuating these rumors. Officials from the Bharatiya Janata Party (BJP), the current ruling party often accused of Anti-Muslim bias, have reportedly referred to Muslims as “human bombs” and “corona jihad.” 11 On Twitter, Rangoli Chandel, manager for the popular Bollywood star Kangana Ranaut and known supporter of Prime Minister Narendra Modi, tweeted to her 100,000 followers that Muslims should be made to stand in a line and be shot dead.12.  Unfortunately, this kind of repugnant call to violence can’t be read in context as a mere empty threat. This year, Hindu supremacists backed anti-Muslim pogroms in New Delhi; the riots, which began in response to protests against a new citizenship bill marginalizing Muslim immigrants, killed over 50 people.13.

The spread of these rumors is often marked by a sense of urgency among people who need information about the pandemic and perceive a deficit in trustworthy speakers. In the U.S. and around the world, government agencies, religious officials, the press, and community leaders have been at odds with one another in their messaging, leaving the public with an inconsistent account of the facts. For example, during a public briefing, William N. Bryan, head of science at the Department of Homeland Security recounted how bleach and alcohol can kill the coronavirus on surfaces, leading President Trump to suggest moments later that someone ought to investigate the health benefits of injecting disinfectants; afterwards, the Washington State Emergency Management department rushed to warn the public against such practice.14. Feeling pressure to resolve conflicting medical advice, the World Health Organization claimed in a February notice that we’re facing an “infodemic,” a term the organization defines as “an overabundance of information – some accurate and some not – that makes it hard for people to find trustworthy sources and reliable guidance when they need it.”15.

But information overload only partly describes the problem. First, the “infodemic” framing doesn’t capture how we find information, a process increasingly mediated by major technology companies. As Erin McAweeney writes for Data & Society, “the constant stream of breaking news during the first few weeks of this pandemic created novel keyword searches and search engine data voids waiting to be filled with information” and therefore, opportunists could purposely or incidentally fill those voids with misleading content. 16. Buzzfeed senior reporter Jane Lytvynenko shared one example in which Google searches to vet a conspiracy theory yielded different results. “Wuhan fauci grant,” yields top stories and fact-checking, whereas “wuhan fauci donation” returns no articles debunking the theory. 17 As McAweeney writes, panicked people aren’t likely to wait around in uncertainty and will look for medical help, even if it means they get bad advice. This provides a chance for groups with their own ideological goals to spread content that misinforms about COVID-19 and, if it blames or attacks a group of people, may also be dangerous speech.

Additionally, online users don’t see the full glut of data the web has to offer. Instead, content is put in front of their eyes by social media companies, which control which news gets prioritized. These companies are likely having trouble catching COVID-19 related misinformation and dangerous speech, itself often a type of misinformation—as you would expect of speech making blanket assumptions about whole groups of people. Early in March, Facebook placed its roughly 15,000 team of contracted moderators on paid leave and began relying to a greater extent on automation to detect violative content. 18. Automated content moderation is far from perfect; as Facebook’s Head of Health Kang-Xing Jin admits “there may be some limitations to this approach and we may see some longer response times and make more mistakes as a result.” 19. Already, users sharing accurate news have had their posts flagged as spam due to a bug at Facebook. 20.  During a time of crisis, users underserved by social media companies are more likely to be exposed to dangerous speech that otherwise could at least be reported and removed.

There’s no palm seed, peppercorn, or lime that can quickly fix this crisis. Many solutions will be local in nature, as communities look for convincing messengers to correct falsehoods for particular audiences; for example devout doctors who could push back on claims of religion-based COVID-19 immunity. For the social media companies, as Dangerous Speech Project Director Susan Benesch co-writes with Center for Democracy & Technology Free Expression Project Director Emma Llanso in a recent op-ed, it’s vital that companies treat this imperfect emergency move to automation as a temporary measure. Finally, it’s essential to resist the temptation, in the face of swirling rumors and violence, to lapse into cynicism. In A Paradise Built In Hell, Rebecca Solnit pushes back against the stereotype of the “selfish, panicky, or regressively savage human being in times of disaster.” 21 Instead, she highlights moments in disasters when people rise to the occasion, supporting one another out of a newly realized mutual need, affinity and connection. As Solnit writes, “the recovery of this purpose and closeness without crisis or pressure is the great contemporary task of being human.” 22 We agree.