Can criticizing the government be Dangerous Speech?

After a recent shooting and Molotov cocktail attack on facilities where U.S. immigration policy is enforced, in a climate of outrage at that policy, U.S. officials claimed the attacks were inspired by public criticism of the government. This presents tough questions about the overlap between political speech and Dangerous Speech. When people describe government policy as evil or even criminal, and then others attack facilities where the policy is carried out, is that Dangerous Speech?

Geroge Zoley, the CEO of a company that runs immigration detention centers for the government and was targeted in both attacks, said yes. He claims that “false narratives and deliberate mischaracterizations were the basis for [the attacks].” Similarly, the Immigration and Customs Enforcement agency (ICE), which enforces U.S. immigration law and had one of its offices shot at, said in a statement, “Political rhetoric and misinformation that various politicians, media outlets and activist groups recklessly disseminate to the American people regarding the ICE mission only serve to further encourage these violent acts.” Christopher Combs of the Federal Bureau of Investigation (FBI) echoed this, saying, “We cannot allow political discourse to lead us to the point of violence, where federal employees, innocent people doing their jobs, are put in harm’s way.”

Despite these claims, there’s no clear evidence that the recent shooting was politically motivated. To argue for a link between anti-ICE rhetoric and violence, some people are citing a letter the Molotov cocktail thrower allegedly wrote and sent to friends. In it, he refers to the detention facility he attacked as a concentration camp, justifies his violence as necessary to defeat fascism, and encourages others to arm themselves. Conservative political commentator Michelle Malkin has argued that his use of the phrase “concentration camp” is a sign that he was “borrowing from and amplifying” the language of Rep.  Alexandria Ocasio-Cortez (D-NY), who sparked debate in June when she used the phrase to condemn ICE detention centers.

Malkin and other conservatives have denounced Ocasio-Cortez and other liberals, even as liberals attack President Trump for his inflammatory rhetoric – like when he compared immigrants to animals or when he told four congresswomen, all women of color, to “go back where [they] came from.”  This suggests, implicitly, that the criticism of the government is as bad or worse than rhetoric coming from the government itself. It also presents another question: should criticism of a government be suppressed if it inspires violence, and should it be denounced as vigorously as rhetoric from the government itself that depicts an ethnic or religious group as evil or criminal?

The immigration debate in the US has been especially intense during the Trump presidency – with widespread, heated criticism of the separation of asylum-seeking parents from their children at the border, and poor conditions at detention centers. This criticism might encourage people already inclined toward violence to attack government officials and facilities.

Moreover, immigration isn’t the only fraught issue that might inspire attacks. For example, the Tea Party movement intensely and publicly opposed the U.S. government’s tax collection agency, the Internal Revenue Service (IRS), in the months before a series of violent attacks on IRS offices from 2008-2010. Many of the attackers had personal grievances with the agency (the IRS was auditing their past tax returns), but it may also be the case that anti-IRS rhetoric from “politicians, media outlets and activists” helped to push them over the edge.

But asking whether an individual critique of the government – like Ocasio-Cortez’s – caused an attack is a dead end. It’s almost always impossible to identify a single speech act that caused someone to commit violence – just as no individual cigarette is responsible for someone’s lung cancer. However, smoking over time increases the risk of cancer. Similarly, Dangerous Speech has to be classified based on risk, not cause and effect. And in order to do that, one must consider more than the speech itself.

That’s why one factor in our framework for analyzing Dangerous Speech is the social and historical context in which the speech is made or disseminated. Sometimes conditions that are out of the control of the speaker or audience make speech more likely to lead to violence. When this is the case, e.g. when the social or historical context is ripe for violence, speakers (especially those with exceptional influence) need to think carefully about the effect their rhetoric might have on others. Not only could their language convince some that violence is necessary, it may convince even more people to condone violence.

The US is experiencing such a situation right now, and, as a result, political leaders need to think carefully about using otherwise innocuous language that may push people toward violence, and everyone with influence should denounce Dangerous Speech when they see it. Unfortunately, condemnation of Dangerous Speech usually comes only from people who disagree politically with the speaker, and often immediately after an attack takes place, when little is known about who carried it out and why.

For example, after former Democratic congresswoman Gabrielle Giffords was shot in 2011, a sheriff who knew and admired her immediately blamed former Republican vice-presidential nominee Sarah Palin, who had previously published a photo with crosshairs over Giffords’ district (which Palin’s political action committee was “targeting” for a Republican takeover in the 2010 election). The claim that this image motivated the attacker was widely circulated but ultimately unsubstantiated. 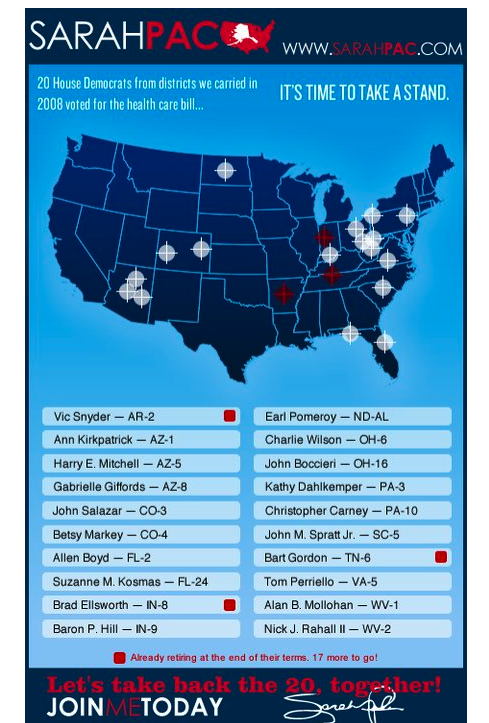 Despite the potential for political rhetoric to encourage violence, criticism of the government must not be silenced – the right to criticize the government is a key reason to defend freedom of expression. Around the world, authoritarian leaders silence their critics by claiming their speech is harmful. For example, the official Twitter account of the Pakistani ruling party recently warned journalists that criticism of the government can aid enemies and may be viewed as treasonous. Earlier this year, Russian President Vladimir Putin signed a new law that criminalizes “fake news” and other speech that presents “clear disrespect for society, government, state symbols, the constitution and government institutions.”

Because of this threat to freedom of expression, attacks on the government musn’t be conflated with non-violent protests that express similar positions. Some news coverage have made this mistake. For example, the Washington Examiner newspaper identified four recent incidents in which ICE was “targeted.” Two were the attacks described above, but the other two were non-violent protests. In one case, protestors replaced the US flag flying outside an ICE detention center with a Mexican flag, and in the other, protestors blocked the entrance to the ICE headquarters in Washington, DC. To lump these acts of protest with violent attacks is wrong and damaging, since such conflation can be used to shut down protest, which is an invaluable exercise of freedom of expression.

In the same vein, Michelle Malkin is wrong to suggest that it become a crime to fund organizations opposed to ICE and the government policies it enforces. In an article about these attacks and protests, she called for criminal prosecution of George Soros and others who have donated to liberal pro-immigration U.S. organizations, accusing them of funding “dangerous immigration anarchy”.

A primary goal of equating the rhetoric of President Trump and Rep. Ocasio-Cortez seems to be to force the media and public figures to condemn both sides in order to appear unbiased. But to treat both sides equally is a false equivalence. Trump is a primary architect of this volatile political context, and Ocasio-Cortez is not: she is comparatively new to politics, not nearly as powerful as Trump, and her rhetoric is not nearly as inflammatory. Nonetheless, political speech now comes in a context that is ripe for violence, and hyperbolic criticism of Trump’s policies can become dangerous.  Years of demonizing immigrants, warning of existential invasions, and endorsing violence at rallies has escalated what was already a polarizing debate.

Also, anti-immigrant speech from the right and anti-ICE rhetoric from the left are meant for different audiences, and it seems clear that a subset of the anti-immigration audience is far more primed for violence. These anti-ICE attacks pale in comparison to the string of far-right mass killings and halted plots from recent months against minorities (who are far more vulnerable to violence than the government is). Attempting to blame both sides equally for inflammatory speech distracts from the outsized threat of far-right extremists, but promoting this distraction is now a mainstream talking point for Republican leaders.

It’s important that political debates not stray into Dangerous Speech. Everyone, regardless of their political party, needs to reject Dangerous Speech when they see it, especially when it’s from their own side. But we must also reject false equivalence that is meant to shut down debate and distract from white supremacist violence.